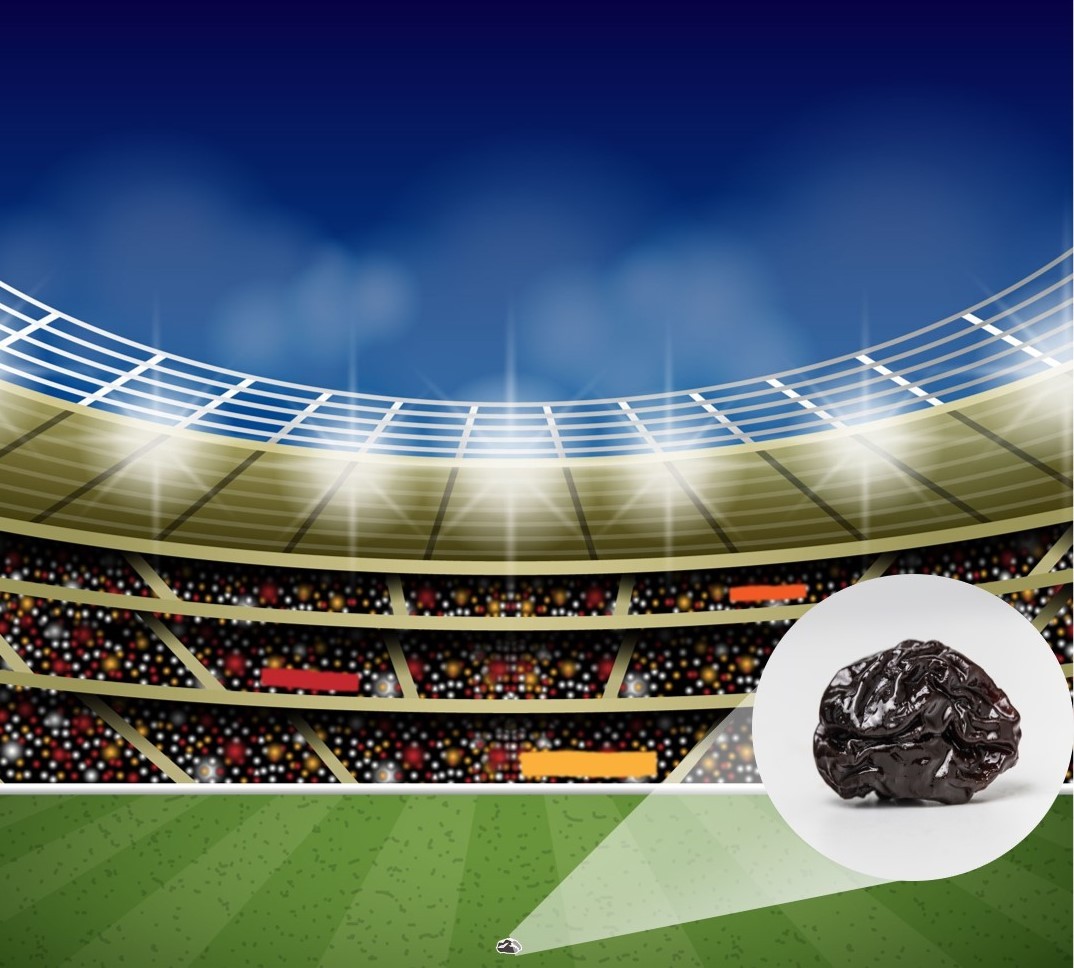 Atoms are the building blocks of matter. Atoms are the smallest possible particles into which an element can be subdivided, without changing its properties.

As building blocks, they can be thought of spheres.

However, to understand how and why atoms join up with one another, a more sophisticated model is needed..

The modern model of the atom suggests that virtually all of the mass of an atom is concentrated in the middle ( the nucleus). The nucleus is surrounded by electrons. 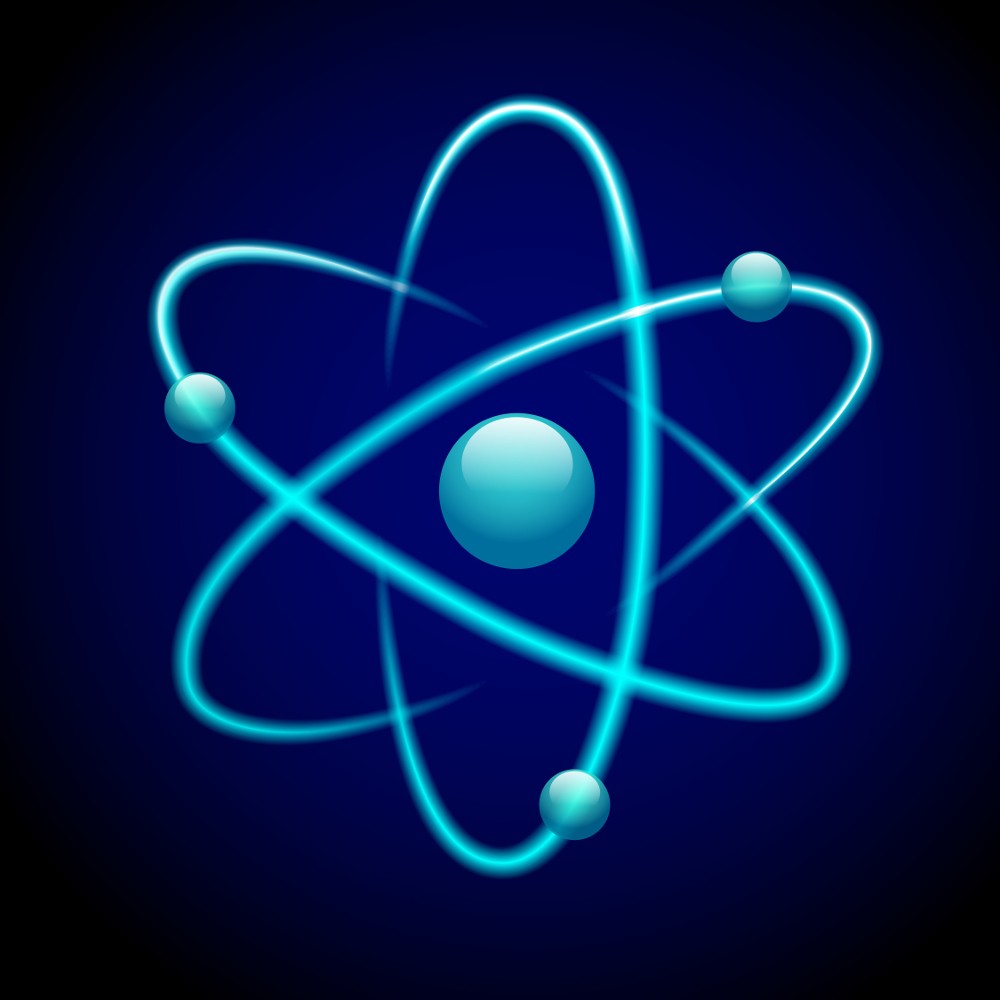 The nucleus is very small compared to the atom as a whole. As electrons are even smaller, most of an atom is empty space.  The diameter of a nucleus can be 100,000 times less than the diameter of an atom.

The small size of atoms give scientists a problem when trying to see them. Conventional microscopes cannot resolve particles at an atomic scale.

This short video gives an outline of how modern science is beginning to reveal the atomic world to us in a visual way.

The technique outlined involves a nanoparticle of the element platinum. This is a particle which is a few nanometres in size. 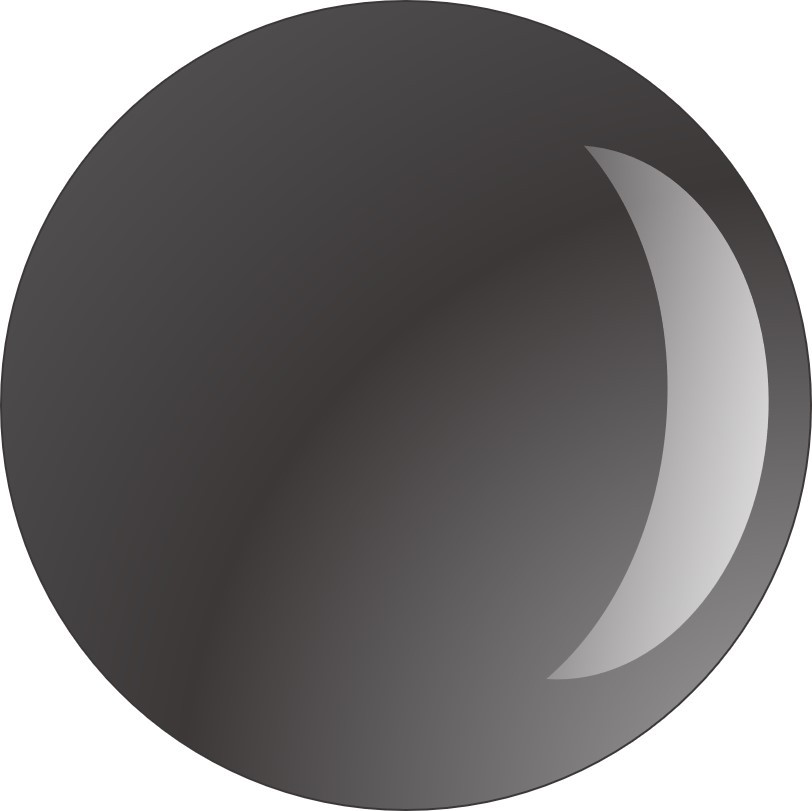 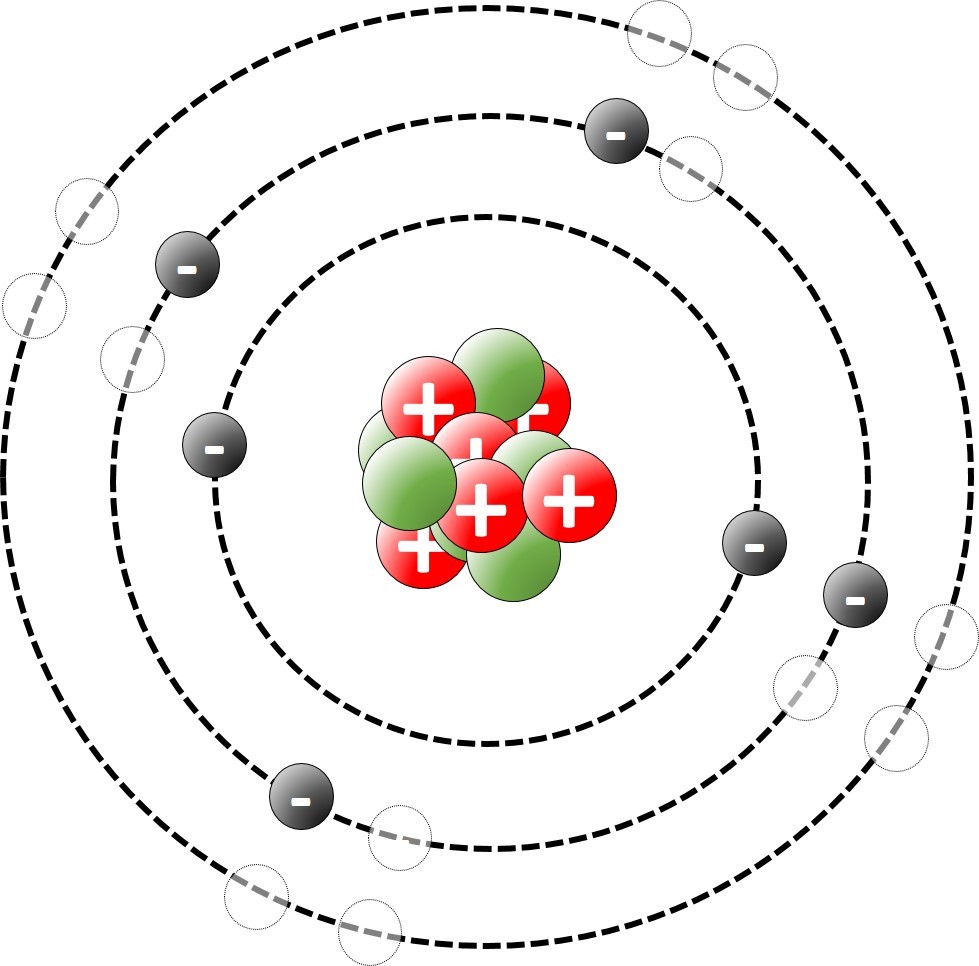 1.14 know what is meant by the terms atom and molecule

1.15 know the structure of an atom in terms of the positions, relative masses and relative charges of sub-atomic particles

The modern model of the atom was developed early in the 20th Century.

Sometimes it is convenient to think of atoms as spheres. On other occasions we think of a model where the atom is made up of a nucleus surrounded by shells of electrons.

An orbital model of the atom shows electrons in orbit around the nucleus. 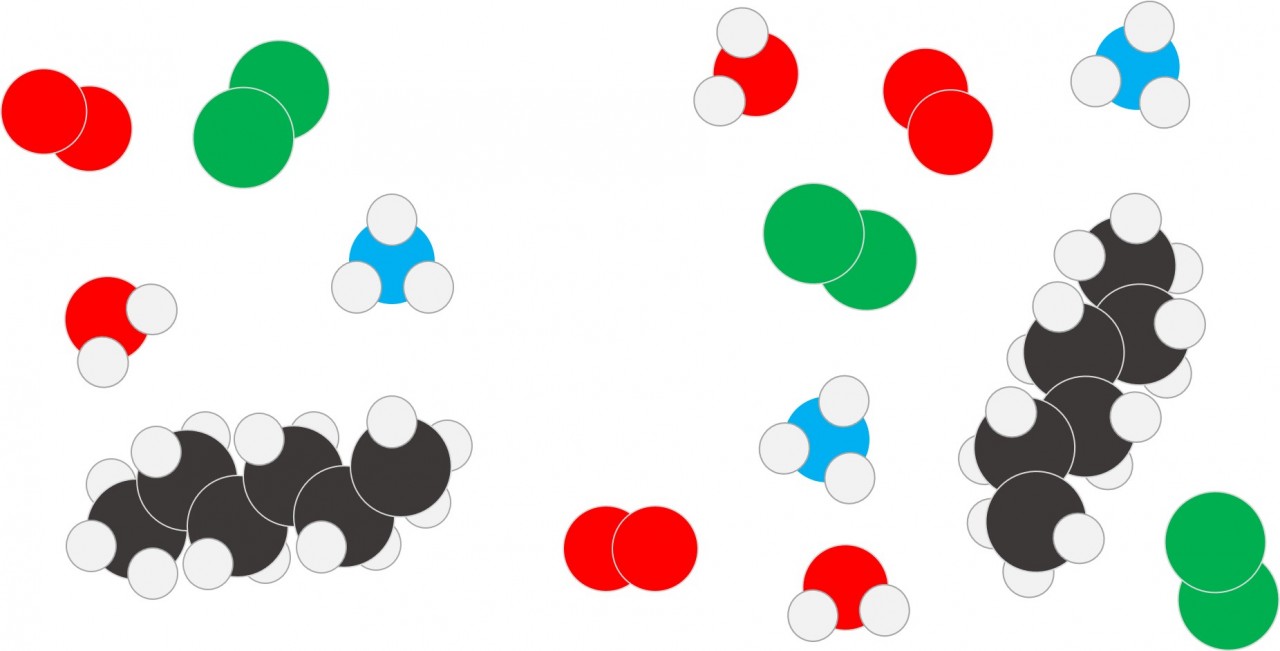 ​A molecule is a particle composed of more than one atom joined together by covalent bonds.

The atoms in a molecule might all be of the same element eg Hydrogen (H2) or Oxygen (O2) . When a molecule contains atoms of different elements it is a compound e.g. Water (H2O) or Methane (CH4).

The different colours are used to represent atoms of different elements: 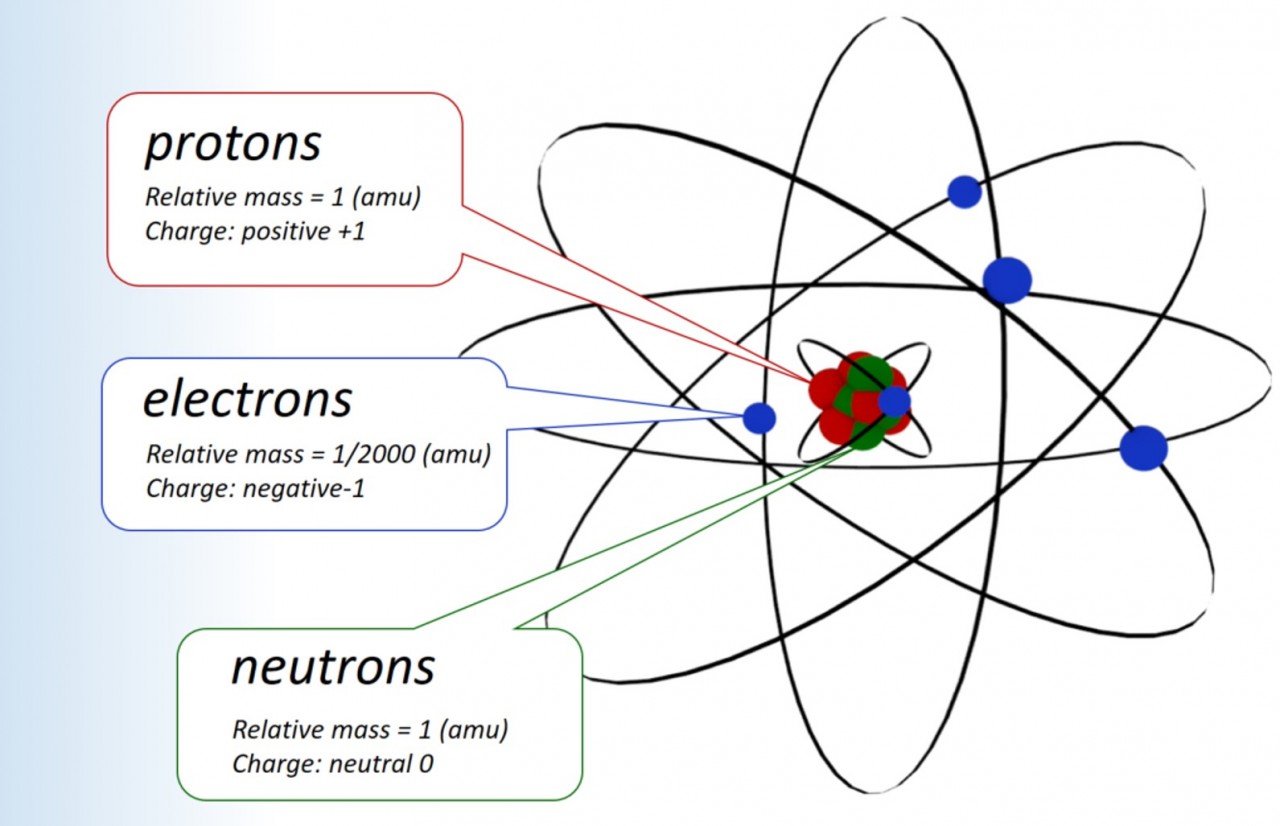 masses and charges of subatomic particles

1.15 know the structure of an atom in terms of the positions, relative masses and relative charges of sub-atomic particles

particles are the particles found inside atoms. These include protons, neutrons and electrons:

This animation shows an atom of carbon, we know it is carbon because it has six protons shown in the nucleus.

The number of protons in the nucleus is given by the atomic number - ( also known as the proton number). You can find this on the periodic table.

The mass number of an atom is the total number of protons and neutrons. In this case, the nucleus has six neutrons and the atom therefore, has a mass number of 6 + 6  = 12.

Atoms with the same number of protons but a different number of neutrons can exist. These are known as isotopes of the element.

Carbon has three isotopes, Carbon 12, Carbon 13 and carbon 14.  These are described in more detail in the next section:

Use this animation to explore the number and type of sub atomic particles which make up the three isotopes of carbon. Use the information to complete a copy of the table below:

1.17 be able to calculate the relative atomic mass of an element (Ar) from isotopic abundances

The relative atomic mass of an element is an average value of the mass of the individual isotopes in a naturally occurring sample of the element. 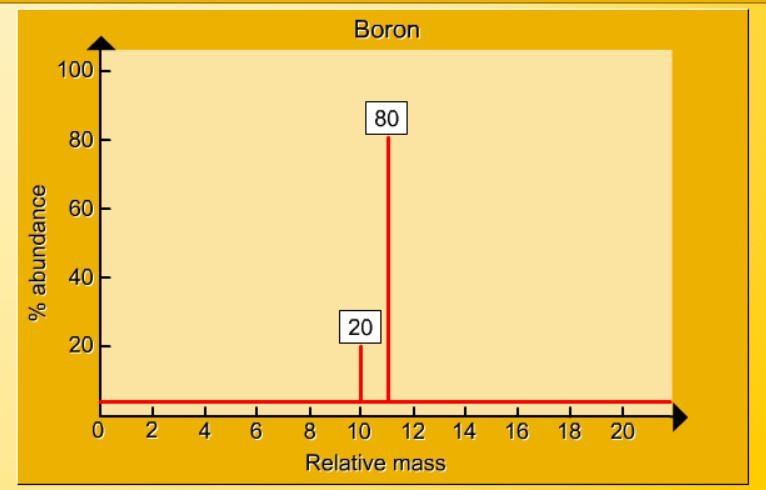 The mass spectrum of boron

The image shown here is a mass spectrum of the element boron. It shows the relative number of isotopes in a naturally occurring sample of the element.

We  can calculate Ar values using this isotopic abundance data:

The weighted mean is calculated as follows:

The relative atomic mass of boron is a weighted mean of all the isotopes in a naturally occurring sample of the element. 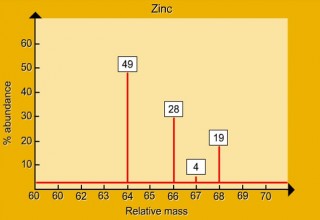 The mass spectrum of Zinc 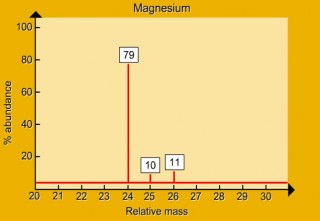 The mass spectrum of Magnesium 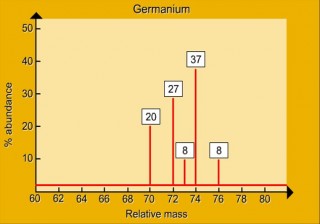 The mass spectrum of Germanium

Answers: Ar of Zinc, Ar of Germanium, Ar of Magnesium